I think the advantages of hybrid vigor might be overstated.  While hybrids could possibly introduce beneficial genes, what is more important than producing hybrids is selection pressure for  favorable genes.  Hybrids might at one point been a mechanism to introduce adaptive traits, but in the near future such traits could be introduced via genetic engineering and then artificially selected for, as with domesticated animals or plants.

Cochran is right that whatever advantages hybrid vigor might bring are basically “a first-generation effect.”   One sees this with canine mutts, where after mutts interbreed for multiple generations, especially in the wild, mutts will often develop pariah-like characteristics, losing their traits of domestication.  In short, there is no (artificial) selection pressure on mutts for (beneficial) domesticated traits.

Cochran also states that hybrids among more genetically distant populations could possibly produce more beneficial traits, but there are plenty of counterexamples to this.

For instance, the genetic distance between Europeans and Amerindians is significant, but mestizos do not in anyway seem remarkable.  Other than the donkey show and taco, mestizos haven’t contributed much to humanity.  Mestizos are fairly mediocre both academically and athletically, as evidenced both by Mexico’s poor academic performance and low medal count in the Olympics, and mestizos don’t really seem to excel at much, other than the recent honor of being the most obese people on the planet.

Mestizos are a walking and breathing counterexample to the benefits of hybrid vigor.

“95% of White Americans Have No African Ancestry“

Regarding the recent move by the Cathedral to make Santa black, Richard Spencer tweets:

“Clause has very little to do w/ St. Nicholas. He’s an avatar of Odin.”

Which is basically correct.  Santa as we know him today is a composite of sorts, but his oldest (and truest?) form is that of Odin leading his ghostly yule procession through the sky.  This older Odin meme is then later overlaid with Christian elements, such as St. Nicholas (who, by the way, is Greek, not Turkish — Turkey didn’t exist in the 4th century), and Sinterklaas stories of central and northern Europe, but many of the Germanic pagan elements still survive surrounding yule/Christmas, such as elves, yule logs, etc.

Interestingly, there’s a similar parallel with the character Gandalf of Lord of the Rings.  Tolkien, a professor of Germanic languages, clearly modeled Gandalf after Odin — the “grey wanderer” known by many names — but this is overlaid with certain Christian elements, such as Gandalf sacrificing himself for the Fellowship and then later resurrected (although resurrection is not unknown in Germanic paganism, such as the promise of Balder’s resurrection).

Nonetheless, both Santa and Gandalf both suffer from one irredeemable sin in the eyes of the Cathedral: They’re white.   Cathedral’s answer:  Dump’em or darken’em. 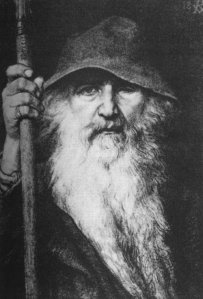 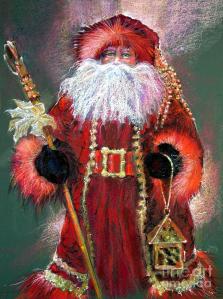 I’m late to this party, but Matt Sigl’s “The Dark Enlightenment: The Creepy Internet Movement You’d Better Take Seriously” has piqued mainstream interest, along with Scott Alexander’s Anti-Reactionary FAQ, Klint Finley’s “Geeks for Monarchy: The Rise of the Neoreactionaries,” Bryce Laliberte’s “It’s not racist to seek an ‘exit’,” and Jason Kuznicki’s “Zombie Apocalypse or Marginal Revolution?” (and here, here, etc.).

As I’ve noted previously, the Dark Enlightenment, largely an American phenomenon notwithstanding Land, has much in common with the European archeofuturist or identitarian movement, although the later is less influenced by libertarianism (perhaps for the better).

“The Laws of the Cathedral. Obey or Perish!”

“Primer on Immigration and Human BioDiversity“

As has already been noted at Occam’s Razor (here, here, here, here and here), one of the on-going wars of Cultural Marxists / the Cathedral is the war against traditional European folkways, most recently demonstrated by the ghettoization of Western norms.  Yes, one sees the usual suspects behind all this, although others, like blacks and mestizos, are quick to join in, and their bête noire above all others is often the traditional folkways of Germanic peoples.

Exhibit A:  A recent piece by some black woman named Aisha Harris at Slate, entitled “Santa Claus Should Not Be a White Man Anymore.”  Yes, she thinks Santa henceforth should be a negro, nevermind the historical reality of Santa, which is: Santa is a composite of various European pagan and Christian figures, starting with Odin leading his ghostly yule procession through the sky, which was later overlaid with Christian elements like the Sinterklaas stories of central and northern Europe.  In short, Santa is European, which is precisely why these people want to wallpaper over him.

Exhibit B:  The recent Hobbit movie: The Hobbit: The Desolation of Smaug (released today).   Although this movie suffers from other problems, such as superfluous action scenes at the expense of story, this is the first movie of LotR franchise that displays diversity, although it is minimal.  Early on, some negro bounty hunter is briefly seen, and later in the film, at the Lake-town, one sees various negroes and other non-whites standing around with wassup? expressions on their faces.  Disappointing.  Peter Jackson was able to withstand Cultural Marxist pressures in his first four movies, but the pressure must have been too great.  (Looking at who now controls New Line Cinema, one shouldn’t be surprised.)  Of course, all of this is quite egregious when contrasted with Tolkien’s linguistic-mythological melieu, which is grounded in Germanic paganism. (There were dark people in Tolkien’s writings, but they were from the south (Endor / the Hither Lands, not Middle Earth), evil and sided with Sauron, and probably looked more like Asian Indians than negroes.)

Of course, there are other examples, like the movie Thor, which has already been thoroughly discussed by others.

One can only imagine the uproar if, for example, people tried to wallpaper over the racial realities of Chinese or African folkways.  Only whites, suffering from pathological altruism, seem to tolerate the complete and deliberate sabotaging of their folkways.  I, for one, am tired of it.

On a lighter, and final note, Hobbit #2 finally delivers its first Black resident. You won’t even need a quick set of eyeballs, as the camera focuses on this townsperson at least twice to make sure you notice. I’m sure Peter Jackson feels this buys him an “Escape the racist accusation” card.

Not so fast, Pete!

For some reason, likely a “racist” one, this lone Black extra is cast in the Middle Earth equivalent of Detroit – Laketown (eerily evocative of Motown). For all their focus on aesthetic quality, this team of Kiwi filmmakers had to eventually cave in to the forces of political correctness, who have been crusading for a rainbow Middle Earth since the release of The Lord of the Rings trilogy a decade ago. No doubt this token Black will only wet the appetites of the Multicult and accusations of even deeper levels of racism are sure to follow this act of appeasement. Say a prayer of thanks that filming is complete for the Hobbit series and gird yourself for Hollywood’s adaptation of The Silmarillion.

But it gets worse. As the greedy, scheming master of Laketown (played by the Jew Stephen Fry) addresses his people, the camera pans over the audience. At first, I thought some Uruk Hai had crept in. But no, when the camera returned again and again, it became clear that Laketown is afflicted with dark, vibrant, nappy racial diversity.

Peter Jackson endured more than a decade of kvetching about the “racism” of his faithful adaptation of The Lord of the Rings, in which the races of Middle Earth are portrayed as white and their enemies dark. But now he has caved. The first Hobbit movie pullulates with pasty orcs and goblins. And now we have Negroes and Papuans in frigid Laketown.

This movie is an insult to the taste and intelligence of its audience and to the memory of J. R. R. Tolkien. I can’t recommend it, and it will only be out of a sense of duty to you, my audience, that I will rouse myself to see the final film next December.

Santa is really Odin (via Land)

“The ghettoization of American Culture“