Note:  Please add links to new cuckservative articles in the comments below.  I’ll add them.

I’ll add them. Wow, oh wow. The cuckservative meme, which started among the Dissident Right / alt-right, has gone completely viral. It is really quite amusing to watch. The real power of the cuckservative meme is it deprives the cucks of their masculinity, making them figures of ridicule. The very word cuckservative, cuck (a white man who watches his wife have sex with a non-white, usually a black man) + conservative, aptly summarizes cuckservatives who act as cuckolds by facilitating mass non-white immigration and other policies detrimental to whites.  The cuckservative does not know how to react.  He either thinks these people are “secret Democrat agents” or he just points, sputters and yells, “racist!”

I’m proud to say that I was one of the first to write on cuckservatives: “What is a Cuckservative?” This was later cross-posted at Radix Journal:  “Cuckservative, A Definition”

Many others weighing in: Renegade Tribune, The Right Drama, Atlantic Centurion, VDare (twitter), RooshV (twitter), Outside In.

Buzzfeed: “Behind The Racist Hashtag That Is Blowing Up Twitter.”  Forney: “Ten Signs You Might Be A Cuckervative.” Xenophobe: “Cuckservative Inc Stock is Tanking ($CUCK).”

Matt Lewis: “I do worry that this white nationalism business is starting to take off”

TRS: “It Would Be Very Cuckservative” (podcast)

More:  Milo Yiannopoulos (misses the point on origin and meaning).  Theden: “The Cuckservative Civil War.”  TRC:  “The Alt-Right as Disruption.” Age of Treason: “Calling out the Cuckery.”    Tommy Christopher: “Trump Fans Target ‘Mike Cuckabee’ for Being a ‘Cuckservative’.”

Alexander Hart: “First They Ignore You, Then You Laugh At Them, Then You Win: How The “Cuckservative” Meme Is Undermining Conservatism Inc” (good read)

Charles Johnson: “Refugee From Cuckservatism” (misses point on origin and meaning.  As pointed out in an email to me: “Goldberg and Podhoretz are neoconservatives, not cuckservatives, and the neocons aren’t cucked. They work for their own ethnic interests.  They actually have their own ethno-state.”)  Richard Spencer responds here (a must-read, important for getting the cuckservative meme right).

Alexander Hart: “Cuckservatism: The Cuckoo In The Conservative Movement’s Nest”

David French is in meltdown mode over ‘cuckservative’.  Apparently he still thinks “Democrats are the real racists” because he is a cuck.  Massive twitter criticism of David and then he publishes this response. Jared Taylor responds.  Hunter Wallace responds.

Must see series of musicals inspired by the cuckservative meme.

Here are some memes that I found on Twitter, /pol/, Renegade Tribune, and elsewhere: 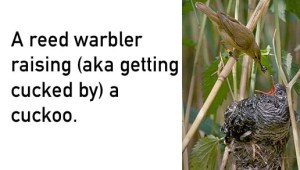 This is just a small sample of the now hundreds of memes out there.  For the largest collection of memes, see this collection.

Please provide links in comments below to new articles.  I’ll add them.